Spiritual Healing is the Only Solution to Endless Pandemics and Bioweapons

A surge of drug-resistant infections (DRI), viral superbugs and pandemics resulting from the relentless pursuit of materialism and negligence in spirituality has intensified an existential war between microbes and humans. DRI alone could kill 10 million people a year by 2050.1 A century of material drugs, antimicrobials and vaccines (VA) has magnified the problems rather than allaying them. I submit that spiritual healing is the only way for us to survive this existential war.

Quantum mechanics shows that everything is both particle (material) and wave (energy), aka body and mind (soul/spirit), respectively. The body is a byproduct of the spirit – the living element composed of immaterial energies Chinese call qi, which enliven the body and cure disorders to sustain health. The loss of qi from mind/body separation results in death despite all bodily materials remaining intact, which means that matter without qi cannot sustain health.

Lacking this knowledge, doctors mask symptoms with drugs that have no qi, and ignore their causes. The untreated causes continue to ruin the body, which, along with the cumulative side effects of chronic drug use, result in untold casualties. This lethal effect is evident by 19%-49% drop in deaths associated with doctor strikes in various nations, which rose back to prestrike level when doctors resumed working!2

Put simply, up to 49% of the population died just from doctors doing their jobs! Millions more died annually from orthodox therapies and medical errors.3  Dr. J. Mercola found from CDC data in 1997 that the #1 cause of death for Americans age 40 or younger was “unintentional injections and adverse reactions!” 4 Iatrogenic deaths have not alarmed the public due to lack of disclosure by the media.

The CV pandemic has brought the ineptitude of orthodox medicine to the limelight. Scientists work fervently on alternatives. Yet as Einstein said, “doing the same thing and expecting a different result is insanity,” we cannot continue to suppress symptoms with material remedies, but must cure their causes with immaterial qi. Traditional Chinese medicine (TCM) does just that.

TCM found that disease factors cause blockages of qi flow from the mind to body (mind/body blockages, MBB) depriving tissues of qi and causing symptoms, so clearing the MBB would cure the problems. Severe MBB are unresponsive to acupuncture, but can be cleared by anesthetic nerve blocks. Combining the two, a therapy called Neuro-BioEnergetics (NBE), produces dramatic results! Below is a scientific explanation.

Einstein’s Relativity equation shows that the finite physical Universe is “0” and will always be “0” in size compared to the infinite spiritual realm. 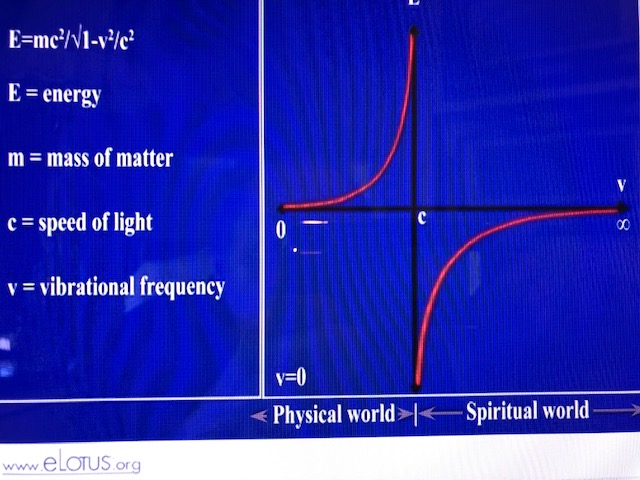 Hence, science knows “nothing” about our existence, and more material research, or postulating with mathematics or physics, would not change this fact. We can observe “what” has  happened, but would never know “why.” More critical, however, is that without spiritual healing, humanity will not survive the age of biowarfare.

The fallacy of material therapy is that matter becomes disorder with time according to the Law of entropy. Since curing a disorder is to restore order, or restore health, entropic matter, hence cannot cure disease.

Thus, curing disorders with material remedies, such as drugs and vaccines, will fail, as it contradicts the Law of entropy.

In contrast, the behaviors of immaterial qi are negative entropy (negentropy) — they remain in order, alive, never rot, or die.5 Furthermore, qi can transform into physical matter such as the Universe and keep its longevity by the Law of Karma, or  “as you sew, so shall you reap,” 6

Karma is based on qi and balance, as only living creatures can sew, and each of us reaps from our own deeds. The Law shapes our destiny and I can prove it with physics or eastern wisdom.5

Using the NBE method and TCM, I cure disorders by restoring qi and balance. Most of our patients felt dramatic relief with their first treatment despite other therapies having failed to help. In 1996 I presented my findings in a medical meeting – the first time a physician proved that acquired disorders can be cured.

Ample cases on my website substantiate this monumental discovery. 7

Treating infections with antibiotics, antivirals and vaccines similarly violates the Law of entropy and will fail. Also, killing germs is based on Pasteur’s outdated Germ Theory, which he ultimately rejected and accepted Bechamp’s idea that regarding infections “it is the terrain and not germs” that matters.

Hence, the true science in curing infections is to enhance tissue immunity, not to kill germs.

TCM concurs, “the breakdown of tissue must occur before germs can proliferate.” Tissue decays from the lack of qi to keep balance, allowing pathogens to proliferate and infections to occur. Note that Antiviral drugs kill germs and ruin balance, while VA put germs in the body and infect it. Both are fallacious; neither restore qi and balance. Using the NBE method to regain qi and balance, even severe viral superbugs and drug-resistant infections (DRI) can be readily cured.8

It bears repeating that germs are irrelevant. Immunity is the key, as healthy people do not get sick.

Note also that microbes cannot be eradicated, as they are evolutionary veterans and a part of our body to keep balance. Moreover, Nature heals by harmony and not antagonism. The use of antibiotic and antiviral drugs ruins qi and balance, causing harm rather than good.

Once balance is regained, all microbes including pathogens, grow symbiotically for the benefits of the whole. Strengthen health also confers long-term immunity, eliminates the need for vaccines, drugs, masks, testing, isolation, distancing, etc., most of which actually impair health.

Masks cannot stop tiny viruses. They block O2 and force rebreathing of CO2, making tissues acidic and prone to blood clots. Masks also create moist enclosures to trap and facilitate germ growth, so are harmful especially to heart and lung patients, and should be worn only by those with bad coughs. Isolation and distancing result in loneliness, fear and depression, which weaken health and help to spread infections.

Meta-studies from 1946-2018 published by CDC prove that these measures do not reduce respiratory diseases.9  African and Asian countries that avoid VA and these measures fare better in the Pandemic than western nations that use them, because over-meddling with microbial ecosystem, such as excessive hand and surface disinfecting, leads to more imbalance. Tanzania, for example, has only 21 deaths using no VA, lockdown, masks, etc,. 10

VA is an act of injecting pathogens into the body, which actually infects the body and not prevents it from being infected!! Even Fauci admitted, “the vaccine makes you worse…when you vaccinate someone, they get infected with what you try to protect them with…You actually enhance the infection.” 11

Also, CDC data on studies involving vaxxed vs unvaxxed kids shows that vaxxed subjects are always sicker. Because VA puts pathogens in the body, so vaxxed subjects carry more germs and are more prone to spread infections.  This is affirmed by CDC data, which show that Flu VA increase the chance of getting CV19 by 68%!! 12

Antibodies induced by VA is an immune response to fight the viral infection caused by the VA, which wouldn’t have existed without the VA!

Putting viruses in the body actually weakens immunity. It is akin to putting foxes in a hen house, which weakens its security and makes it more prone to fox invasions, just as flu shots actually increase CV19 infections by 68%! Hence, the claim that serum antibodies imply protection against infections is a twist of facts!

More misleading is that DNA and RNA viruses are in reality genetic materials that cannot survive unless they insert into the host genome to multiply with the host. The infected cells are regarded as foreign bodies and attacked by the immune system, resulting in autoimmunity. In fact some CV19 VA are labelled as gene therapy! They are in truth genetic bioweapons and not VA by legal definition.

VA is a lucrative business. The industry has instilled fear with CV19, a patented influenza virus with a case fatality rate of only 0.1%, 13  and propaganda to convince millions to take the VA, and will convince millions more to take its second doses. A Pfizer CEO admitted that they want annual boosters of CV19 VA just like annual flu shots. 14

The ignorance about balance and harmony has led to the continuous abuse of antimicrobials, resulting in exploding DRI and viral superbugs. VA adds fuels to this existential war of microbes against humans and will hasten the end of humanity!

More atrocities result from the myths about life and death. Physical life began with conception when the soul joins the zygote, so abortion at any stage is murder. Wrongful rulings by judges who do not know the truth have resulted in untold amounts of innocent deaths and associated bad karma.

Similarly, the claim by a billionaire who has no medical training that CV19 vaccines can stop the pandemic is based on no evidence. It has misguided millions into getting experimental mRNA VA! Because millions have been infected by these VA, experts have predicted grave consequences based on the energy science of astrology.15

More atrocities will ensure until we have taken a quantum leap to learn spiritual healing — the only solution to the self destructive human genocide.

7.Chronic Disorders Can Be Cured,  www.drtong.com.

Related topics that I feel would generate interests and benefits for society:

Strengthen Immunity is the Only Way to Stop Pandemics

A Spiritual Approach to Improve Health and Immunity via Deep Sleep