Professor Yuen Kwok-yung, a Hong Kong infectious specialist, expressed in a video his deep concern about drug-resistant infections (DRI). Most of the patients died because there is no drug cure.

DRI is caused by abusive use of antibiotics (AB), which is not the correct treatment of infections as I shall explain. AB treat symptoms and ignore the cause, which continues to cause more infections, giving opportunities for microbes to mutate to resistant strains.

DRI, cancer and other modern ailments have exploded in recent decades due to the large amount of AB, GMO’s and synthetic chemicals in our food. The use of AB in medicine and farming of livestocks is more pervasive today. Hence, the problems with DRI will escalate.

I am an anesthesiologist trained at the USC School of Medicine. I cure infections by fixing their cause with a therapy called Neuro-BioEnergetics (NBE), which uses nerve blocks to enhance acupuncture, as described below.

Louis Pasteur admitted in his deathbed that the cause of infections lies in the terrain rather than germs. Namely, the decay of tissues (terrain) is the underlying reason for the overgrowth of microbes, which we call infections.

The problem with western medicine is that it studies only the body, while traditional Chinese medicine TCM examines both physical body and non-physical mind (soul/spirit). The crux is that the mind is the living element that provides healing energy, qi, to keep health. TCM restores health by enhancing qi and balance.

Qi enters the body via meridians and provides the heat to dilate capillaries and increase blood flow. It then circulates with blood to tissues and commands blood cells to heal disorders, just as the soul attaches to and governs the body to fix physical problems.

Improper diet, stress and other disease factors block meridian qi/blood flow, which deprives tissues of healing qi and results in disorders. Since qi is from the mind and blood is from body, qi/blood blockages are mind/body blockages (MBB).

Using an analogy, infections caused by MBB are akin to riots caused by traffic jams. Treating infections with AB without fixing MBB is similar to quashing riots with foreign troops without clearing the traffic!

Moreover, AB kills bad germs as well as good ones. So in our analogy, we would be using troops that shoot rioters as well as lawful citizens!

Furthermore, due to traffic hindrance, less troops could reach the riots, while most get to peaceful areas, thus killing more lawful citizens than rioters! This weakens the society, making it more prone to disturbances.

Similarly, MBB impede the AB in the blood from reaching the infected area. As a result, inadequate pathogens are killed, while most AB end up in normal tissues, killing more beneficial bacteria and making the body more vulnerable for diseases, recurrences of the infection and mutation of microbes to drug-resistant strains.

Finally, developing a new drug can take decades to test its long-term safety, whereas microbial mutations can occur within days.. Hence, AB therapy is a lost cause.

To understand qi, I began to learn qigong (qi exercise). The photo below is a thermography showing increase of heat from increased facial blood circulation due to improved qi flow via qigong. This validates the TCM doctrine that “wherever qi goes, blood follows.” And “wherever blood goes, strength follows” is common sense. 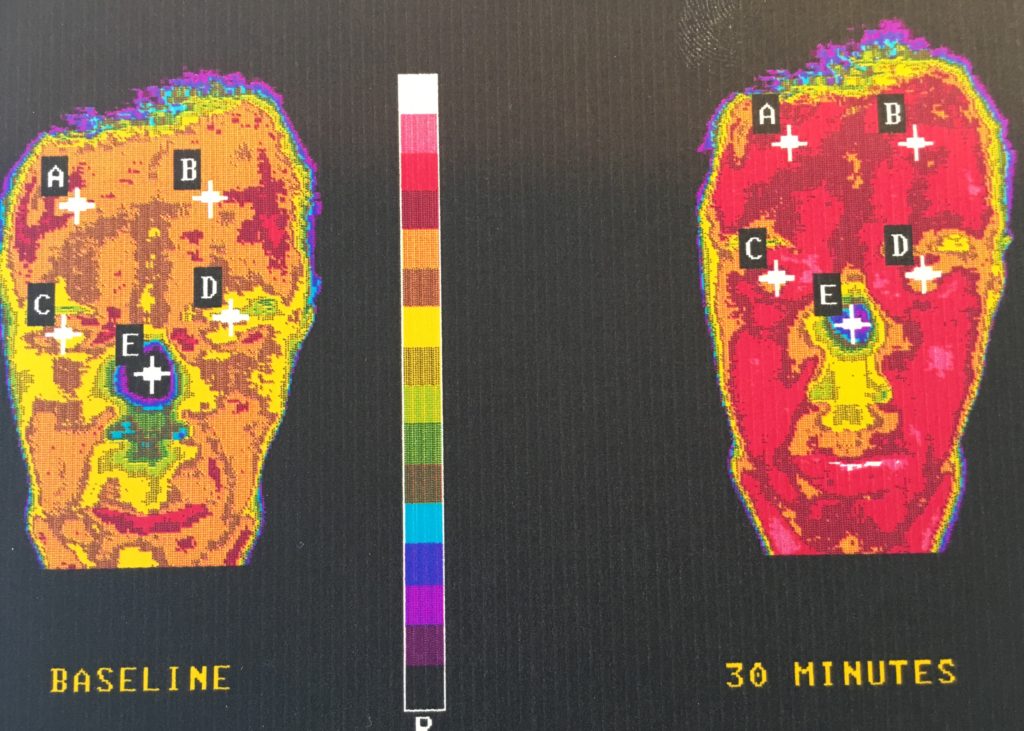 But due to excessive use of my qi to treat patients, I drained my qi and became chronically ill. I had many upper respiratory infections (URI’s) and had to teach my children the NBE method to help. From numerous trials, we have learned to effectively treat various infections. This video shows the teaching of my children the NBE therapy. https://youtu.be/RLy7g61L0CM

There were two times in decades where my older son

has failed to heal his wife’s URI’s, and she developed chest pain with severe coughs, indicating lung infections. Both times he cured her in two days following my phone instructions.

Case 6 was a patient with monthly pneumonia for 10 years and developed DRI and Herpes viral infections despite the use of many AB and drugs. After only one treatment, he could breath through his nose for the first time in 10 years, and drop all drugs, steroid, AB and inhalers. He was cured with periodic therapies for a year, and has never needed any drugs after his first treatment.

Rodman (Case 2), an 89 y/o with COPD, heart and kidney disorders, became comatose after the flu shot. Yet one treatment enabled him to walk unassisted! His family dropped the 8 drugs that he took and nasal oxygen for 20 years! Instead of bedridden, NBE therapies enabled him to be independent. He got the flu shot again the following year and became sick, but was similarly cured by us.

Other patients had vaccine-induced flu’s, hepatitis B, C, meningitis, food poisoning and sinusitis. They all had dramatic relief with their first treatment! See reference 1 for more examples.

It bears repeating that pathogens are irrelevant, clearing the MBB is the cure. Allopathic doctors do not know this and use AB to treat DRI or colitis, when AB is the very culprit that caused the problem.

A former employee of mine, C, suffered from obesity, diabetes and frequent skin infections from eating too much spicy food. I healed her each time with NBE treatments, but her problems always recurred, as she would not control her diet.

Then she decided to see orthodox doctors, who treated her with many drugs. Excessive AB destroyed her intestine flora, resulting in colitis and profuse diarrhea. Yet clueless doctors treated her with more AB not knowing that the culprit of her colitis is too many AB!!

For over four months, she could not eat or drink despite their treatments. Dehydration made her chubby face so sunken with fish-lips that she could not even talk.

She returned to us as her brother was coming from Hong Kong. My daughter, a physician, stopped her diarrhea with two NBE treatments. She resumed oral intake and her face and health returned to normal in a week when her brother came.

During the Middle East Respiratory Syndrome (MERS) epidemic in 2015, Korea was the epicenter. On our trip to Hong Kong, we stopped by a nearly empty Korean airport. I was fine for a week in HK. Then we went to China, where I ate a lot of pineapples. The food produced damp and heat in my body and I came down with severe coughs, headaches, chill, fever, nasal congestion, and profuse sweating at night.

I gave myself a NBE treatment and cleared my symptoms [2]. In fact I felt so great the next day that I indulged myself all day. I exhsusted my qi and the symptoms returned with a vengeance. I needed 5 to 6 treatments the next two days before going home. Luckily, my coughs were much subdued and we went through three airports homeward without any problem.

The point to note is that I got the pathogens on the first pass in Korea but a healthy body kept the pathogens in symbiotic grwoth with other microbes and I had no problem. Only when a week later that I had ruined the balance of my body (excessive heat and damp in the terrain) with food that allowed the MERS viruses to proliferate – 物必先腐然後蟲生.

Another point to note is that when symptoms were reduced by therapies, one must rest, drink fluids and put on enough clothes to avoid the infection to recur.

Finally, treatments for various URI’s are similar. Even allopathic physician with no TCM training can quickly learn the therapy and save lives, such as that of 19 y/o Hong Kong girl Lin 林纯靜, who died from pneumonia after four months of struggle with western drugs and ICU therapies in Hong Kong and Shenzhen. I could have saved her by teaching any doctor to use the NBE technique, just as I guided my son to cure his wife’s pneumonia via telephone.

For physicians not familiar with TCM, Hydrogen Peroxide IV would be the solution for DRI, as it does not kill aerobic good germs. It is the antimicrobial secreted by the body when the MBB is cleared. The NBE method, however, is faster onset and cheaper in cost.

I have presented my findings in a synopsis entitled “Chronic Disorders Are Curable” in a medical conference in 1996 [3], but major journals would not publish my papers. I have sent this information twice to Chairman Xi [4] and to former Secretary of Health of Hong Kong and various officials in HK but have not received a reply.

The NBE/TCM approach is equally cost effective for non-infectious disorders and should be adopted as the main method for healthcare, while harmful and costly drugs and surgery should be reserved for life-saving situations or as an adjunct for TCM.