Anti Aging – at higher magnetic vibrations, qi (life energy) slows  time … eventually down to zero at infinite speed according to Einstein’s E=mc2. The first time I tried the iMRS in a naturopath’s office. I fell asleep within minutes. I awoke 15 minutes later and felt like I had slept for 8 hours.

Even when I was not sleeping on the iMRS mat, I could hear people talking, but not aware of where I was and that I was snoring!! All my life I have had trouble falling asleep, due to excessive thinking. Now I no longer have that problem. If I get up to urinate, I’ll turn on the IMRS and fall asleep quickly! It is just wonderful! 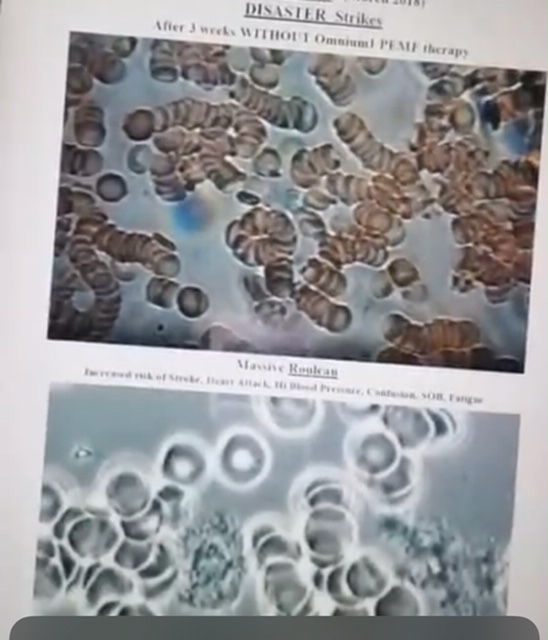 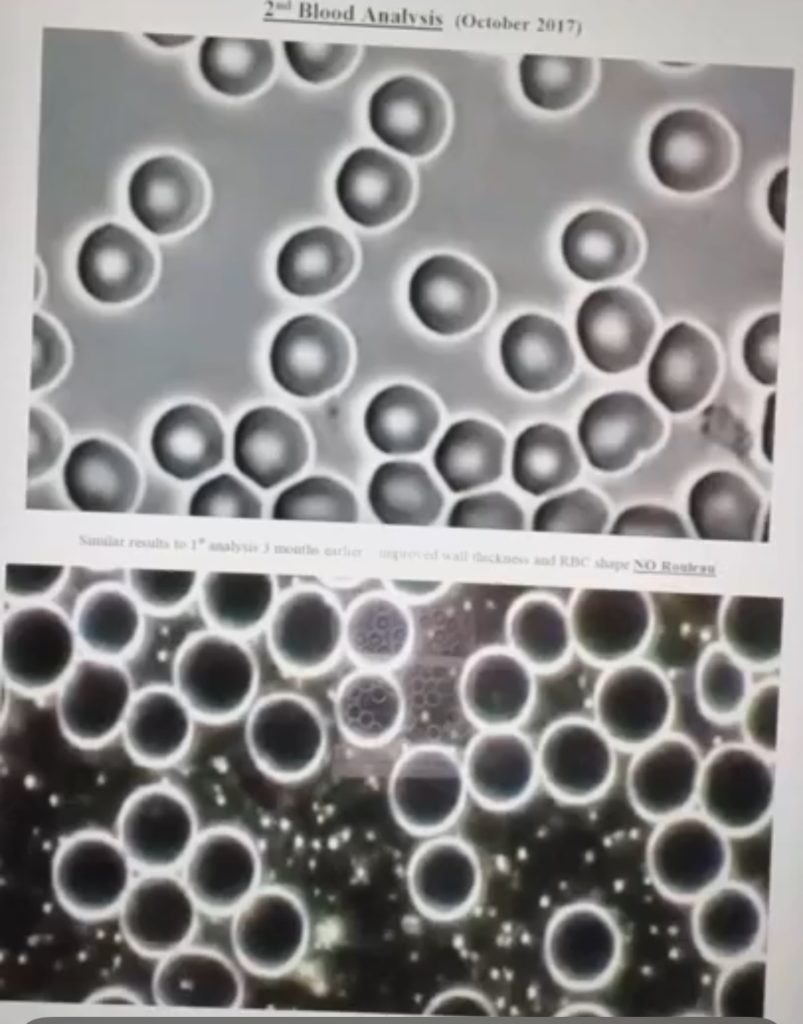 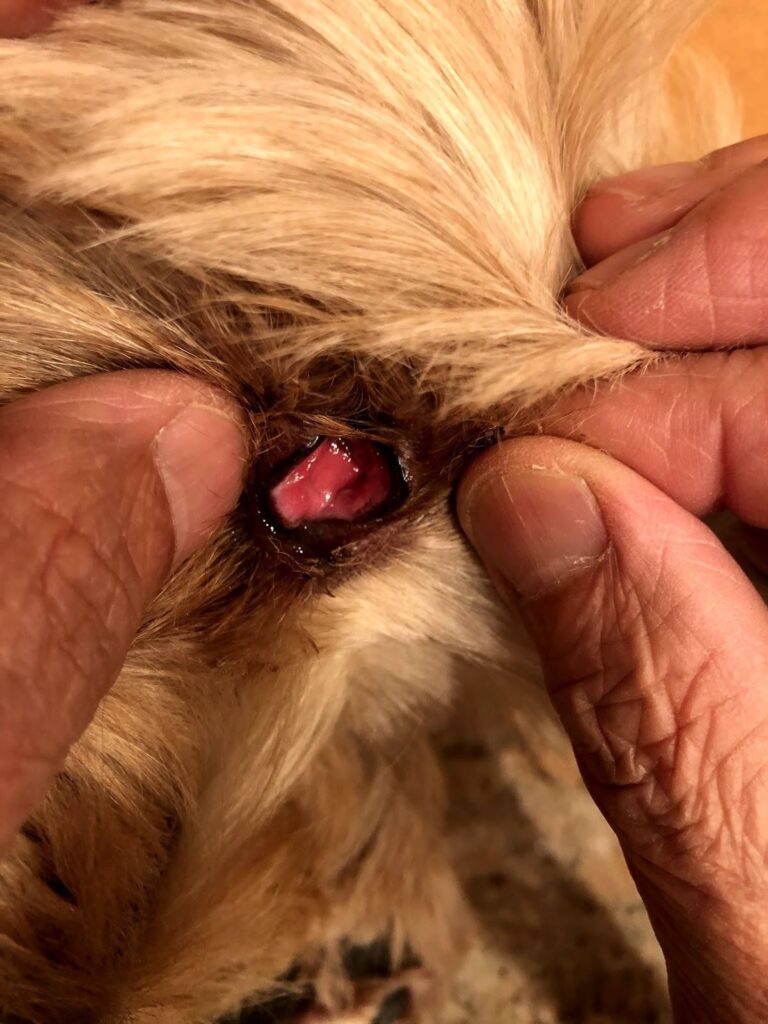 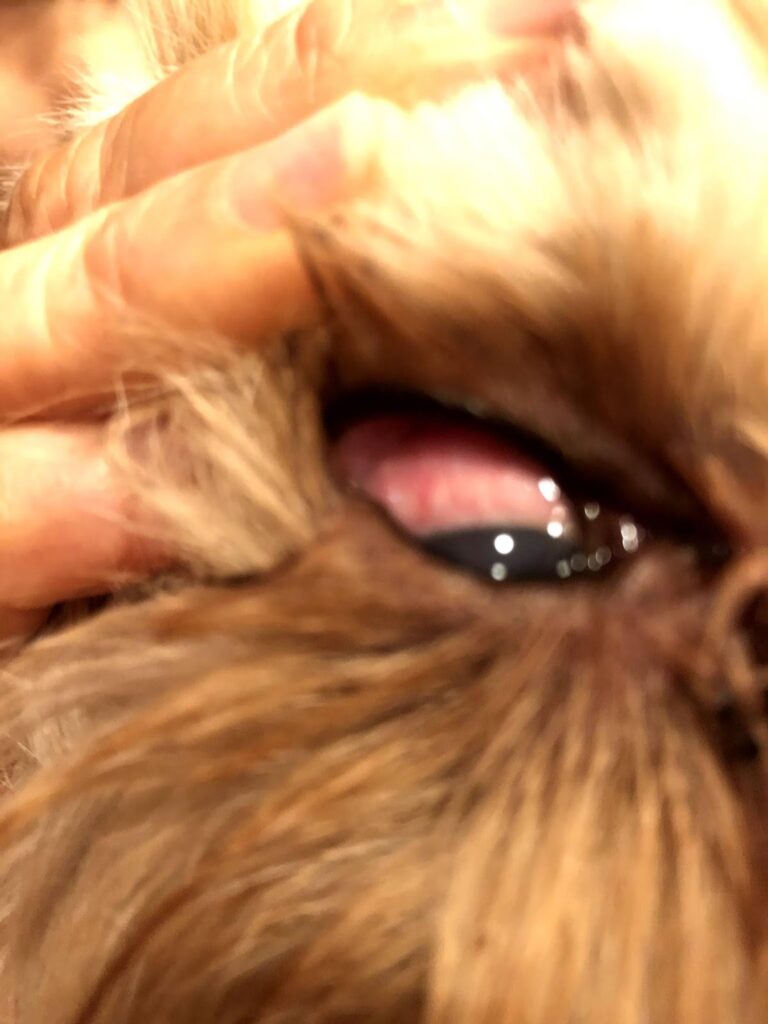 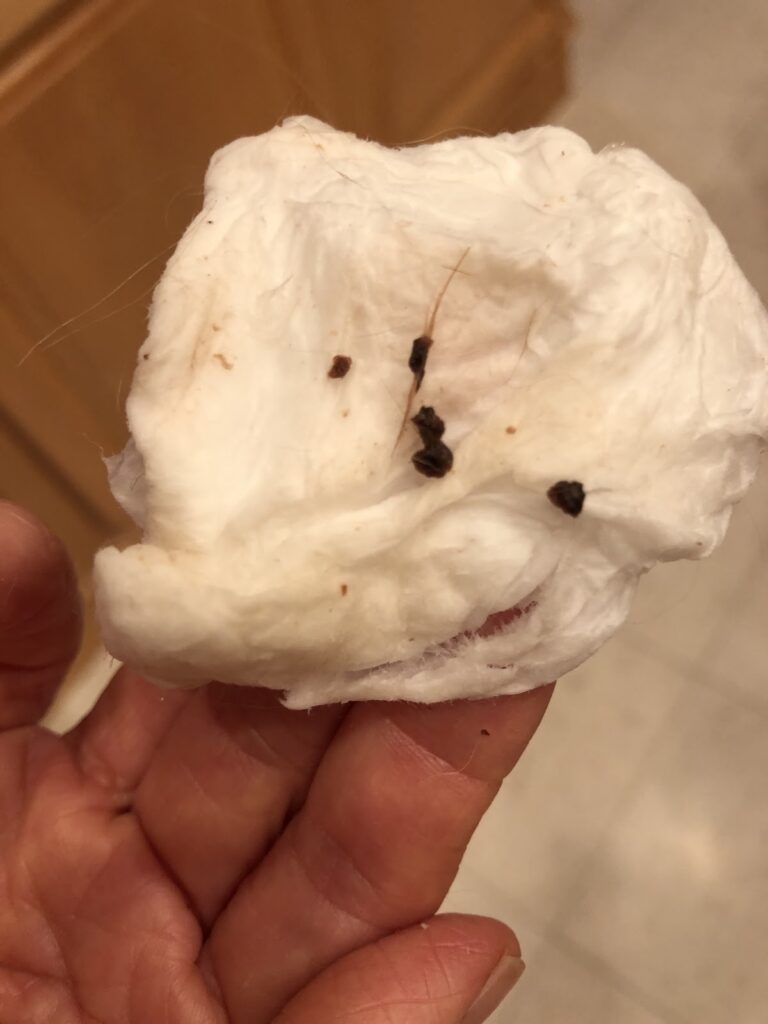 Teddy, our puppy, developed inflamed R eye (upper L) for about two weeks with thick dark exudates (upper R) that ML pulled out from his tear duct. ML tried to clean it and probably scratched it, which made it swollen shut. He also hopped on three legs painfully probably from stepping on something sharp.

ML wanted to take him to a vet. When our other puppy Duchess, whose eye was inflamed and swollen years ago, ML rushed her to the vet and was given antibiotic eye drop. After one drop, her eye was worse and swollen shut. I treated her with NBE therapy, Omnium, and sea salt solution. She was cured.

Teddy was too active for injections, so I held him on the Omnium mat for 12 minute. He was only a little better the next day. Then we received our new iMRS PEMF FIR (far infrared heat). I treated him on the body mat twice and he was cured, including his foot injury. See middle photo above.

Another puppy Marcus also had eye inflammation (below L) and was similarly cured with the iMRS FIR twice (below R). These devices have saved us much veterinarian costs. 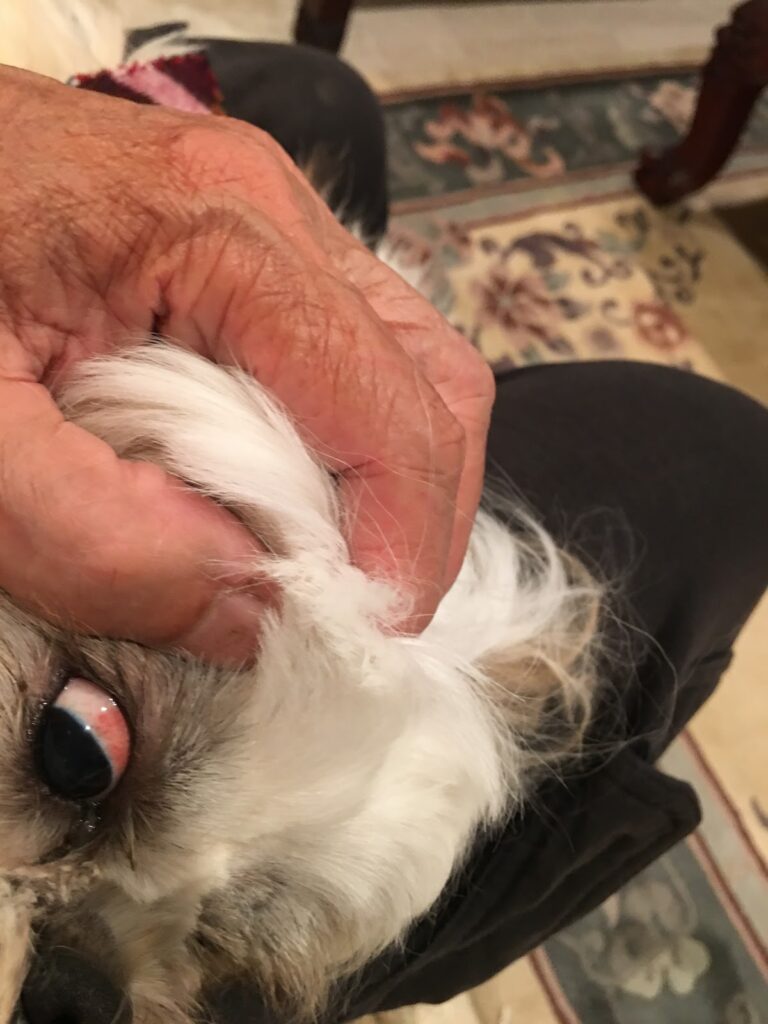 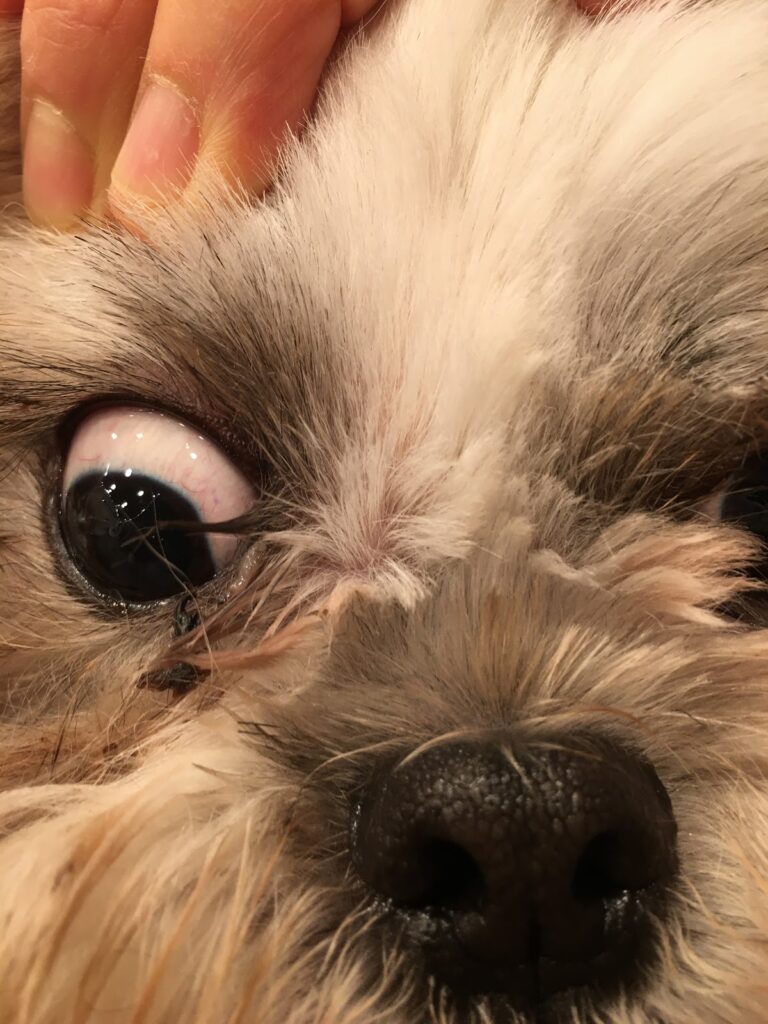 About twenty years ago, I learned to treat patients with qigong and severely damaged my health by draining my life energy qi. Subsequently, I developed symptoms of recurrent fatigue, pain, fibromyalgia, Kidney and Liver problems. I sought help all over the world to no avail, but was able to slowly regain most of my health via self-therapy with my NBE therapy.

However, I had hair loss and an aging look from decades of symptoms (2003 photos). Yet with more self therapies and improved diet, I had recovered my youthful look with hair growth in 2005. 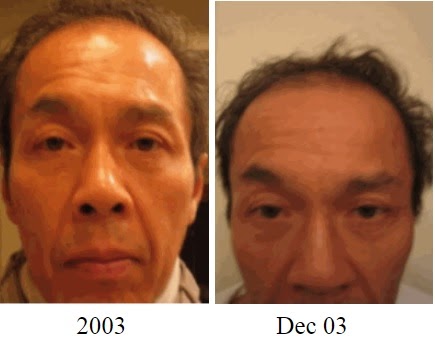 Unfortunately, a cold wind storm damaged my Kidney and Liver, and I developed a gangrenous leg and swollen ankle in 2006 with generalized skin eruptions, hair loss, muscle atrophy and a dark aging complexion. I needed self treatment daily for the pain, itching and fatigue.

Fortunately, the NBE therapies again regenerated new cells to replace aging cells. Moreover, the gangrenous leg was mostly cured without antibiotics, avoiding a recommended amputation. Yet some ankle inflammation and swelling remain to this day.

The stress due to my Mom’s passing and treating my Dad has caused my ankle to be more swollen and painful, which was too tender to do injections (L photo below), so I hopped on one foot for many months, as my Omnium was not strong enough to allay the pain.

Then we got the new iMRS PEMF FIR on October 2020. Using the ‘Spot’ on the ankle and the body mat for 15 minutes, the pain was much reduced and I could walk without much pain 20 minutes later!!

The next morning the pain was less, enabling me to start doing injections again. Three weeks later the swelling was greatly reduced. The ankle was flexible and felt the best in 14 years.  (R photo below) 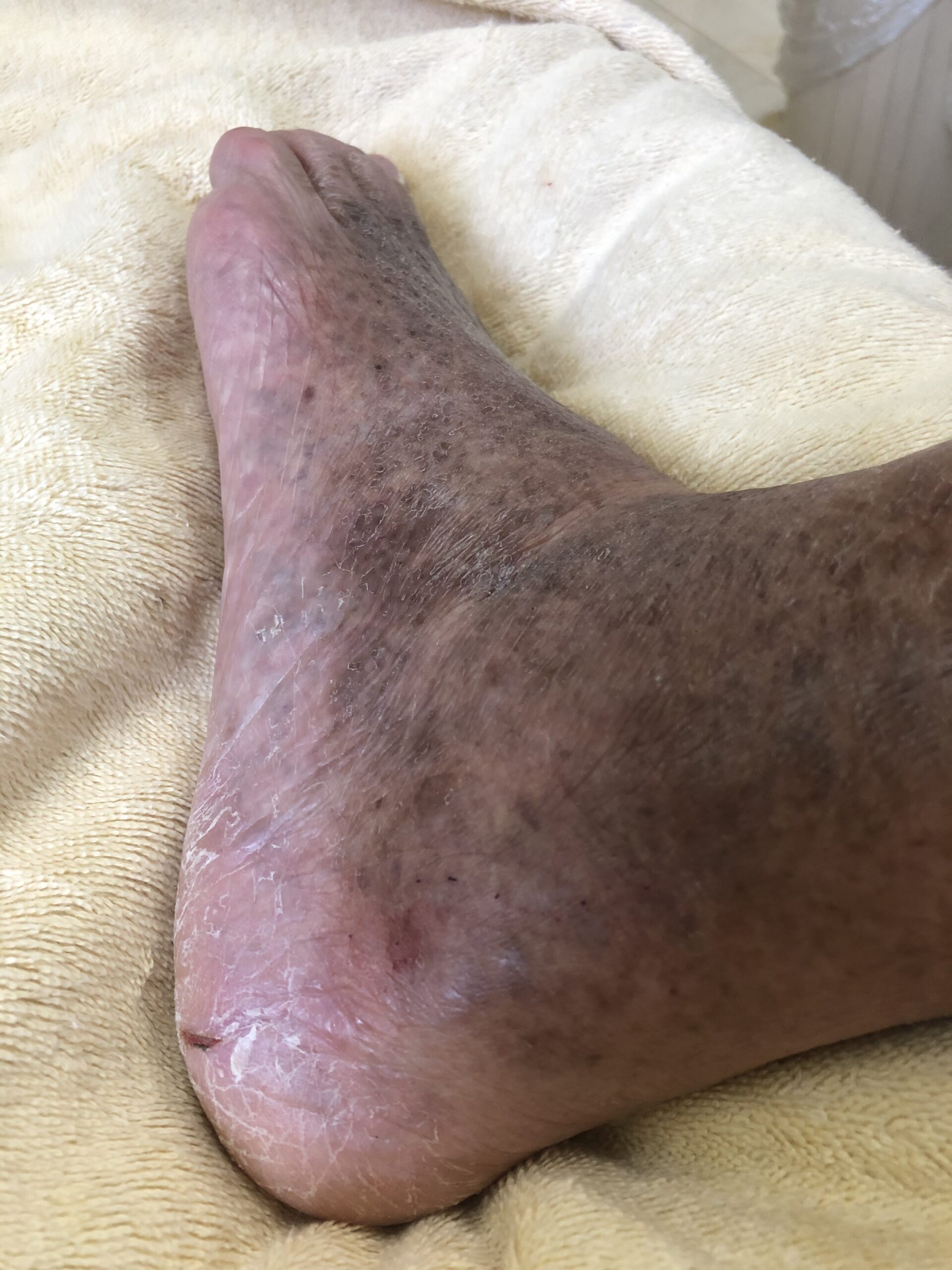 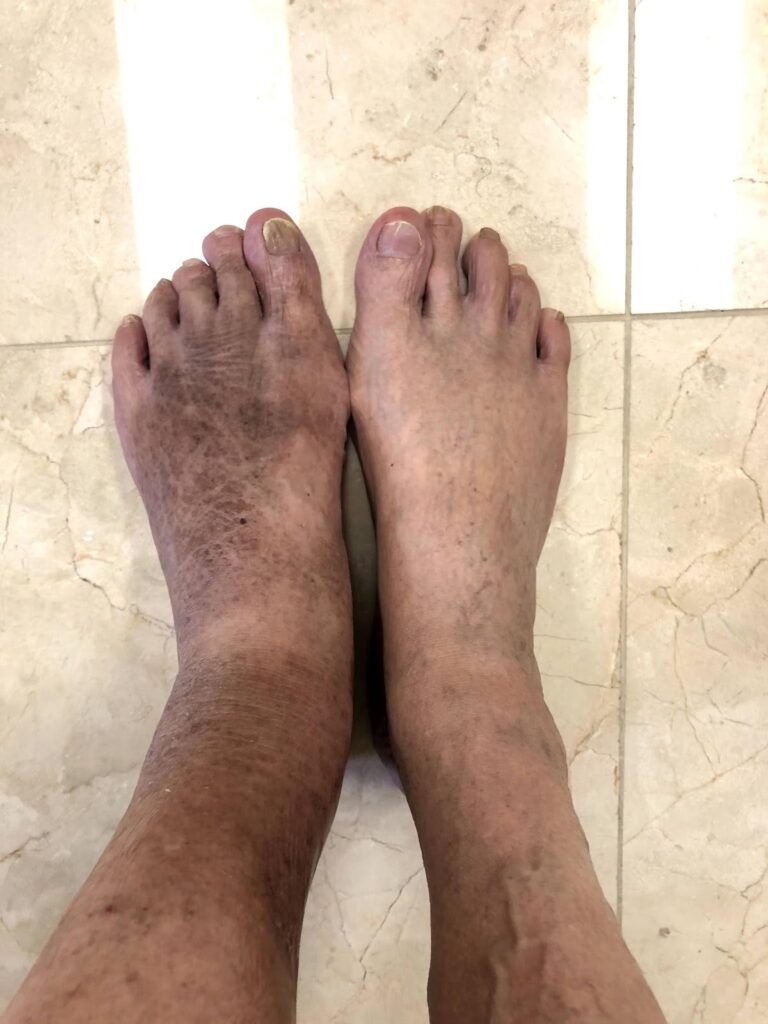 The new PEMF-FIR turned out to be life-saving. The Infrared heat brought out the Yang qi of the Du channel and facilitated doing qigong. Initially I released a lot of gas and felt the bowel relaxed. The chronic spastic bowels had caused constipation and excerbated my hunched back, which I have had for years due to a herniated disk at T11.

The hunchback was getting worse this year due to additional stress of CV19. I felt I would be stuck with the bad posture due to the bony deformity and the fact that bad hunchback is a genetic trait from my parents.

Amazingly, now it is getting easier to stand up straight, especially when I’m energetic! After one and a half months of using the iMRS FIR. I had a busy day on October 30 treating a lot of patients, but remained energetic without taking any nap on the iMRS like I had to do in the past!

However, more alarming was that the stress had caused high blood pressure and dropped my heart rate to 32 from my normal of 60-70. I was so weak and took naps on the iMRS all day. I treated myself daily and raised the HR above 60 and lowered my blood pressure down to 126/83 after 4 treatments, with my son helping to inject my back on the last one. 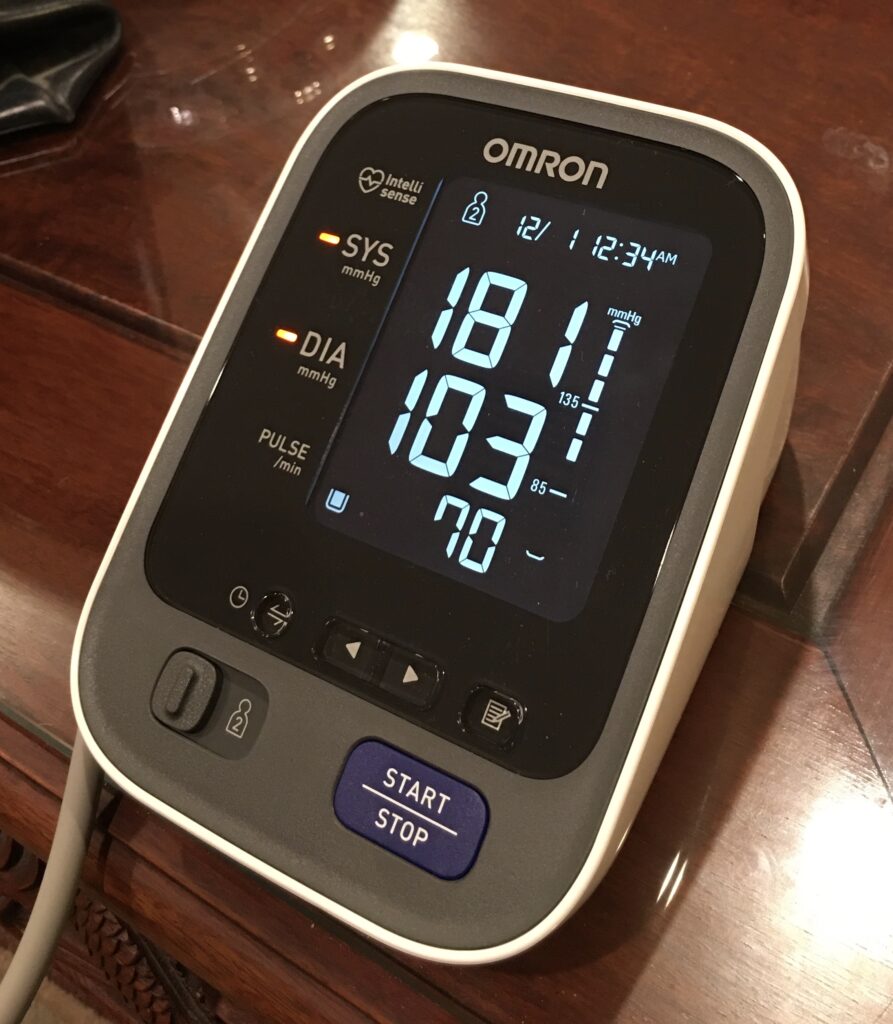 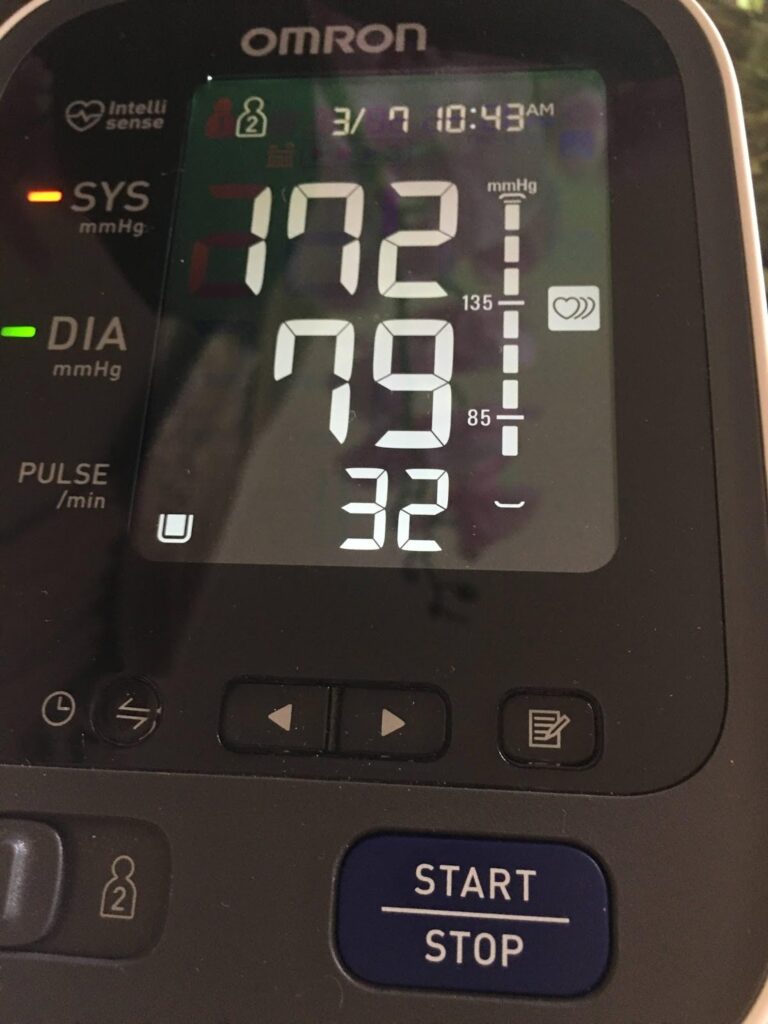 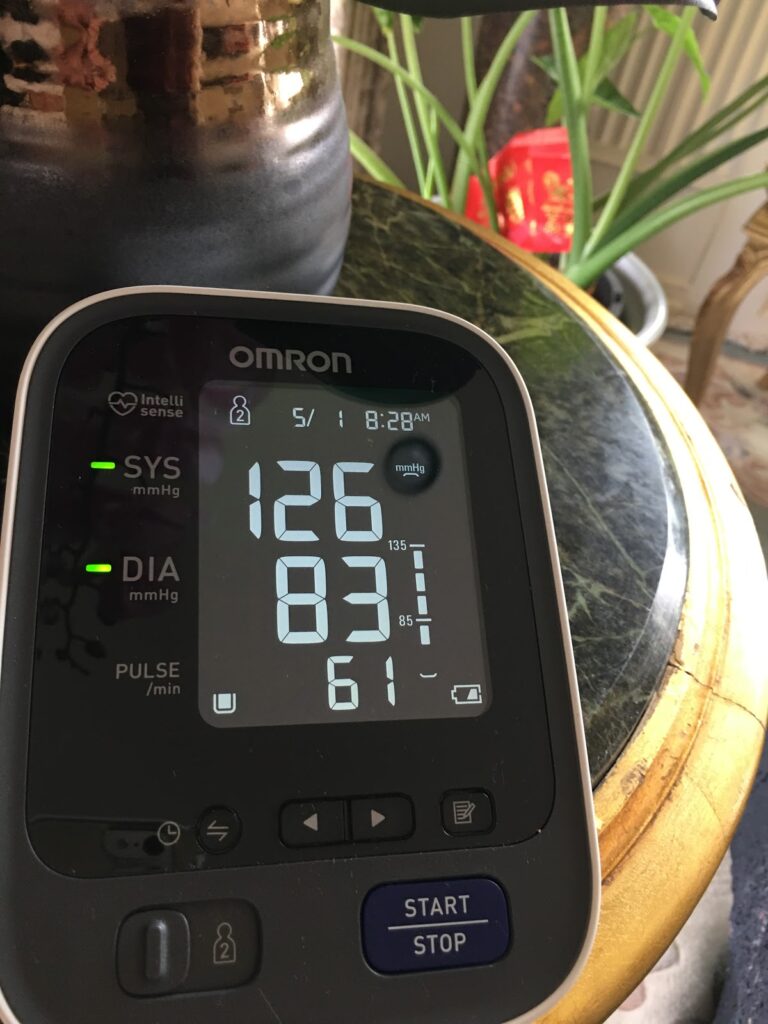 I looked forward to sleeping at night. I would start doing qigong when I lay down, and quickly fell asleep. When I woke up to urinate, I would turn on the iMRS FIR again and repeat the routine. The problem was that I was getting up 3-5 times a night, which woke up ML and disturbed her sleep!

ML recalled our first time trying the SleepM biocrystal mattress back in January. It was so comfortable that we both fell asleep within a minute. The sleep was so deep that 15 minutes felt like hours! We did not want to replace our expensive Tempur-Pedic mattress then,  so we just bought three pillows instead.

We decided to buy the biocrystal mattress this time. The benefits after seven nights of sleeping in the bed were amazing. 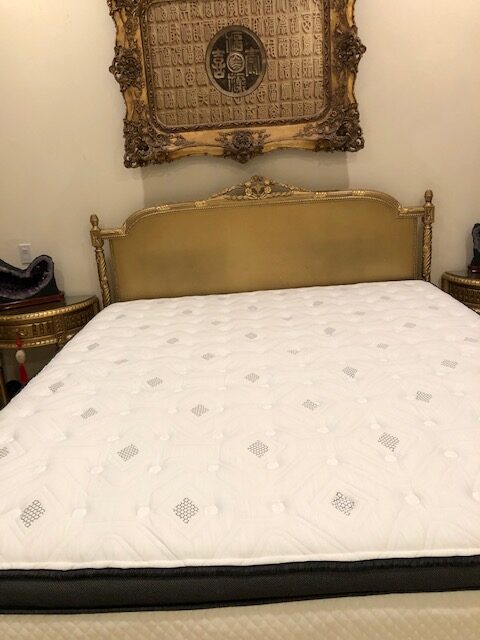 My wife ML has had eye problems even before her Cataract surgery in 2015. In the morning, she could not open her eyes and had trouble feeling awake. Last few years she also developed back and knee pain due to regularly ballet dancing.

All symptoms were greatly improved after ONE night sleeping on the SLM bed! Her eye problems were much better, so was mine.

Her Sciatica came back later driving home from the SLM Center, despite sitting on a SLM crystal pad. Yet the next day she added a back pillow and drove both ways to the Center without pain! Chronic pains cannot be cured so quickly, but getting 8 hours of therapeutic sleep makes the pain progressively better.

My vision also seemed better. A few months ago, I was driving home at night and missed Culver Drive 3 times. Now I don’t miss turns anymore.

My Dad falls frequently at night waking up to urinate. He may hit his head and get a stroke. Now I can combine these devices with my treatments and make him sleep without getting up to urinate.

After using these devices to enhance my NBE therapy just the past few months, I feel like a new person.

Sleepm has just come out with a new biocrystal  eye mask that you can wear to sleep. It would be an additional benefit for the eyes along with sleeping on their biocrystal mattress. Joint pain may also be eased by wrapping the eye mask on it. The mask can be used alone or plugged into a computer or phone app via an USB port to make it warm. It also comes with an ice pack which can be inserted into the mask to make it cold for relieving pain or inflammation.

Pets will love the crystal pads. They will get onto the pad if you put them next to it. Animals have the instinct of feeling the qi. We had test them by offering a dish of Standard Process Vitamins that have good qi, and another one with synthetic vitamins, they’d always choose the SP.

Now we sleep on the Sleepm mattress, getting 8 hours of therapy from the biocrystals every night. On a separate room, we put the iMRS FIR and the Omnium for daytime therapy. I’ll come back and illustrate with photos.