THE VACCINE SONG – CV19, the beginning of an end to vaccination

We are besieged by GLOBAL TERRORISM!

Sara cunio, an Italian MP, called for the arrest of B.Gates for his crime against humanity in Parliament! 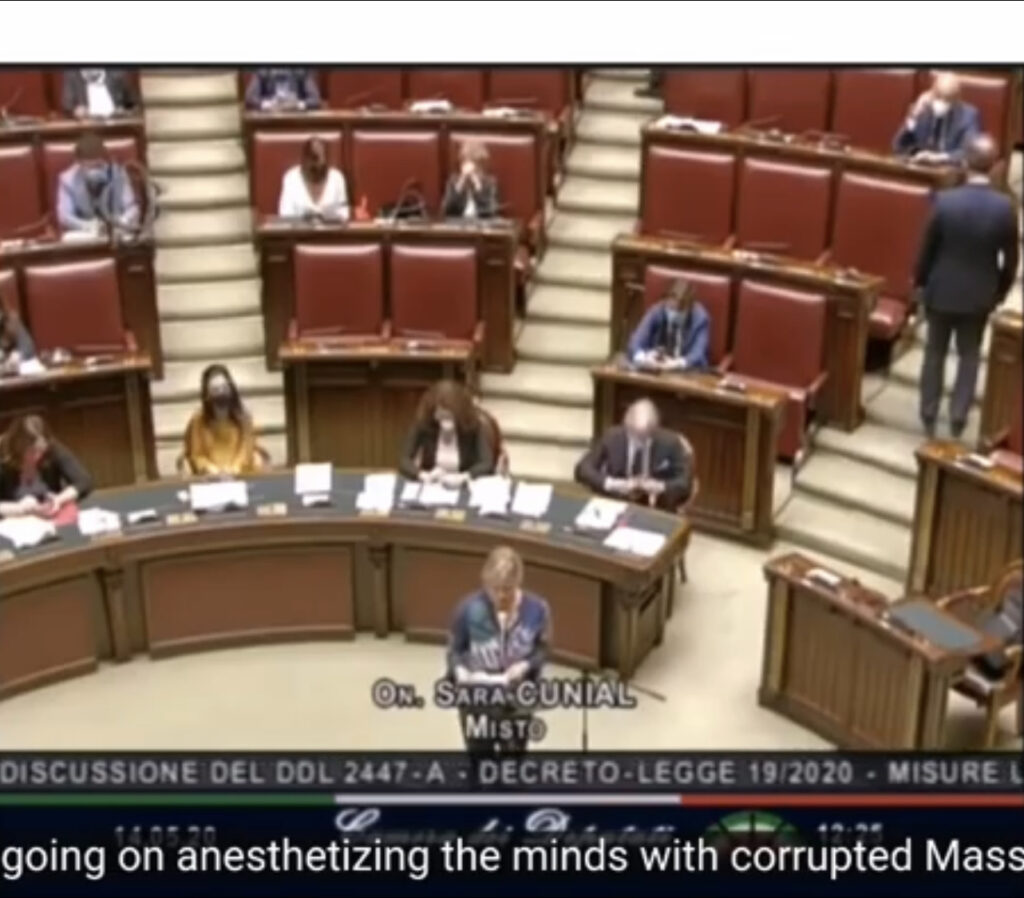 A. Fauchi (time 3:00): “the vaccine makes you worse. “…when you vaccinate someone, they got infected with what you try to protect them with…You actually enhance the infection.”

The truth is that all VA infect and weaken your body. Vaccine viruses, AI genes, DNA or RNA fragments are not used by the body to sustain health. These genetic fragments insert themselves into host cells so they can divide and survive. The immune system regards the genetically altered cells as foreign bodies and attack them, resulting in rampant autoimmune disorders.

Autoimmunity and genetic transhumanism are passed onto future generations, but are non-existent in primitive areas that do not use pharmaceuticals.

Read the stories of the victims of HPV vaccine in the 6-18 article The Vaccine Scam to truly see the atrocities of VA. https://groups.google.com/g/health-happiness-success/c/FpwtoRg_BT8

The Vaccination Song – A eulogy to vaccine victims

An apple a day keeps the doctors at bay,

A vaccine a day sends you to heaven right away!

God was bewildered and queried with dismay:

What brings you here on this premature day?

You confessed that you have taken some vaccines,

Without knowing what vaccination really means!

As you have sewn a lethal deed in a careless way,

So shall you reap… but what a dearly price to pay!

Vaccination is the use of viruses to fight their own kind!

Whoever believes such nonsense is out of their own mind!

Putting the henhouse in the fox’s hand,

Is foolishness difficult to comprehend!

Viruses would not fight other viruses in order the immunity to aid,

Which is the ultimate lack of logic and wisdom.

It’s absurd to vaccinate a newborn to prevent hepatitis B,

As transmission via sex or needle never occur in a baby!

So using vaccines for hepatitis in infants is not funny,

The real motive is not for health but rather for money!

Enhancing the qi of GI mucosa to stop viruses is prevention; *

Injecting viruses into the body actually causes an infection! **

Causing an infection to prevent infection is wrong!

Learn the truth by heeding my vaccination song.

*  NBE, homeopathic and other natural therapies use qi to enhance immunity

** directly quoting from from Dr. Fauci above that vaccines cause the infection first, and enhance it.

Why CV19 is the beginning of the end to Vaccination.

The 1986 Vaccine Injury Act provides immunity to product liability to vaccine makers. Defense for VA injuries or deaths and compensation to victims are paid by tax payers!! R.F. Kennedy, Jr. recently won a landmark lawsuit against the VA industry for failing to provide a single ailment that has been cured by VA.

The industry has also failed to check for long-term safety of VA. If they ever do, they’d destroy all bad evidence, just as the CDC has destroyed the data showing a link between MMR and Autism. It was Dr. William Thompson, who exposed this fact, as no one pays any attention to whether or not safety of VA is tested.

Now the whole world is watching, not only the trials of CV19 vaccines, but other vaccines as well. The worst are the flu vaccines. Before the flu season, the new virus is unknown, so they just guess and put a cocktail of virulent strains, H3N2, etc. and came up with a vaccine in a few months every year!!!!

There will be injuries or deaths from all vaccines, including those made by China. It may take a few years before most people finally realize that VA are harmful and provide no health benefits.

Side effects of CV19 vaccine from Oxford including deaths, paralysis, Bell’s Palsy…and hundreds of deaths from flu deaths have been reported in Korea as of December 2020.

It’s tragic that nations rushed into VA as the cure for CV19 when there is no such evidence other than what B.Gates said. Fauci (NIH) and Redfield (CDC) want to advance the VA agenda by concealing the Supreme Court agreed with Kennedy’s claim that VA there is not a single infection cured by VA.

A member of our chat group has posted a timely but sad story about a RN who has received a CV19 VA and fainted 30 minutes later during a press interview. https://www.youtube.com/watch?v=vbrg41JoSeA&fbclid=IwAR2tGuLN1901w-RcYt2cBNMKSEBOwpa2Xf-5iuwxSg6edFIq6kKMPIMjVTE

More human trials will lead to many more injuries and deaths. Eventually, when people have learned  that vaccination is in reality an act of infecting the body rather than preventing a disease, it will be the end of this fallacious “therapy.”

Note: There are many opinions different than mine. However, in 36 years of practice I have cured over 100,000 viral and other infections including those caused by VA. See #1,3,4,5 of http://drtong.com/2018/10/24/a-monumental-medical-breakthrough-2/

In contrast, no allopathic physician has cured a single infection by fixing its cause (by strengthening immunity), as the allopathic profession lack this knowledge.