To whom it may concern:

In June of 1986, is when all of my health problems began. Since that time I have seen different doctors, tried many types of medications and treatments and have spent thousands of dollars, but nothing really seemed to help until I came to Dr. Tong.

In 1986, I had my wisdom teeth removed and thereafter I started having neck and shoulder pain. I saw an orthopedic who took x-rays and could not find anything wrong. Then I started seeing a chiropractor and eventually went into a physical therapy program. One day the therapist mentioned that I might have a TMJ disorder. By this time I had also started having pain on the right side of my head and face. I then saw a dentist who specialized in TMJ and he did an MRI. The MRI showed that I had adhesions on the TMJ joints. I was sent to a surgeon who did arthroscopic surgery to remove the adhesions and then went for months of physical therapy. After the surgery the facial pain had only become worse. I was having a lot of problems with muscle spasms and nerve pain on the right side of my head and face.

I was starting to feel very discouraged and did not know what to do. I then heard about another dentist who had helped patients with TMJ problems. I made another appointment and had x-rays and impressions taken and found that I had a severe malocclusion. His theory was that by making gold crowns and reconstructing the mouth he could improve the bite and alleviate my pain. After much thought I made the decision to have the dental work done. I spent many hours in the dental chair and as the dental work was almost completed I was feeling worse than ever. I was becoming very weak, my muscles ached all the time and my skin coloring was not good. The facial pain was intolerable.

I then decided to see my family doctor and asked him to authorize an MRI of the brain. I felt sure there had to be something else wrong. The MRI showed I had a pituitary tumor and was sent to an endocrinologist who ran blood tests and confirmed that I had Cushing’s disease. I then saw a neurosurgeon who did brain surgery to remove the tumor. I spent 12 days in the hospital and after coming home I felt better in some ways but I still had the neck, shoulder and facial pain.

After the brain surgery I saw a neurologist who said that I had trigeminal neuralgia. I started taking very strong nerve medications, none of which really stopped the pain. After 6 months decided to get a second opinion and saw a neurologist and a neurosurgeon at Scripps in La Jolla. It was their opinion that I did not have trigeminal neuralgia and that the problem was muscle-related and I should consult a rheumatologist. I saw a rheumatologist at Scripps for injections of cortisone and tried some new medications but because of the long distance to travel and because I didn’t feel it was helping me I decided to find a rheumatologist closer to home.

It had been a year since the pituitary and I was becoming very frustrated going from one doctor to another and no one seemed to be able to help me. The facial pain was becoming worse again and another MRI showed I had a large cyst in the right maxillary sinus. I was then sent to an ENT specialist and had sinus surgery. After the surgery, the facial pain seemed to get somewhat better but was not gone. Within a couple of months I started having some back pain and an ultrasound showed that I had gallstones and would have to get my gallbladder removed.

In the last two years I had been through three surgeries and seen many doctors and yet no one could stop the chronic pain I was having. I then saw my endocrinologist who recommended a good rheumatologist. He diagnosed the problem as thoracic outlet syndrome which had led to a condition known as Reflex Sympathetic Dystrophy. He sent me to UCLA Medical Center for a specialized MRI which confirmed his diagnosis. UCLA was in the process of scheduling some permanent nerve blocks, when much to my surprise I found out that I was pregnant. Because of my condition, they would not consider doing anything until I had the baby. I immediately stopped all medications but within weeks the pain was intolerable again.

Once again I did not know what to do. I told my rheumatologist that I did not think I could make it through the pregnancy without doing something for the pain. He then suggested I call Dr. Tong. He had heard some very positive things about Dr. Tong’s treatments and that he had been successful in helping many of his patients.

I made an appointment to see Dr. Tong and after just a couple of visits the pain was at least 60% better. I found that the acupuncture and nerve block injections worked better than any medicines, muscle relaxants or anti-inflammatory drugs I had taken. I had finally found a way to get some relief from my pain without the use of drugs. During the pregnancy I also developed carpal tunnel syndrome and Dr. Tong’s treatments also helped with that pain after just several visits. A short period of time before having the baby I discontinued treatments but resumed going for more acupuncture and nerve block injections within a couple of months after the delivery and with regular periodic visits I was starting to see improvement in my condition. I feel that Dr. Tong’s treatments have been successful and with continued treatments I hope to one day be pain-free. 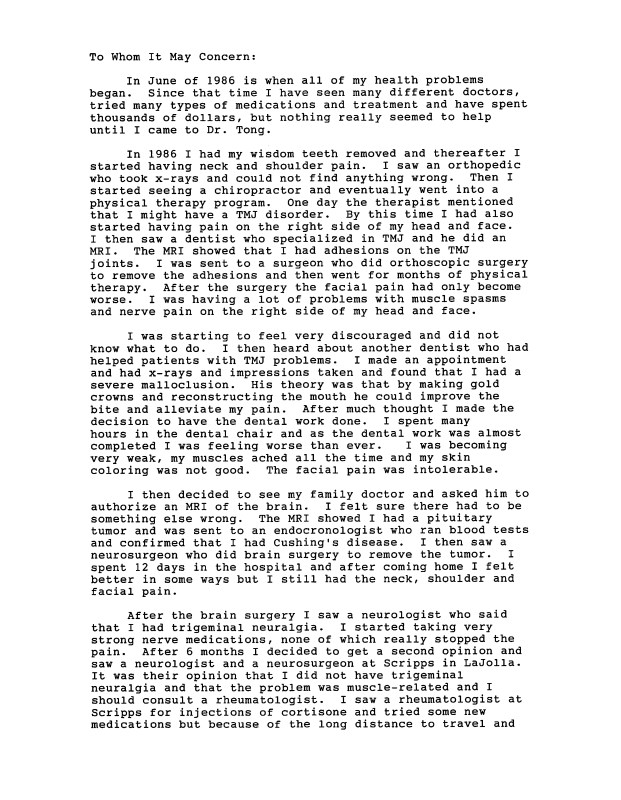 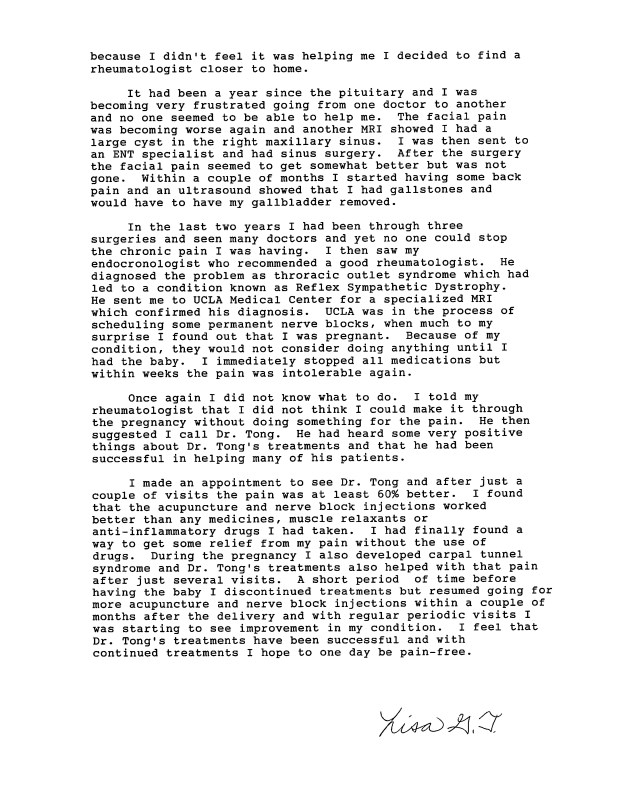