In 1981 I was hit in my car by another car, and sustained back and eye injuries, which at least 50 medical specialists were able to document but unable to cure.

By 1988 my back muscles had deteriorated so much that for weeks I could walk and exercise and on some days I could not even move from a sitting position; and I had no idea when the spasms would start. By 1989 I was unable to engage in more military tours of active duty but was able to secure a job as a law clerk to a very kind judge (Honorable Edward Dean Price of Fresno), and was forced to spend almost 6 months in crutches; and many weeks on the floor of his chambers during working hours typing case material into a computer because I could not stand up nor sit in a chair for longer than 10 minutes.

I tried stretching and exercising under direction of military doctors assigned to Balboa Navy Hospital in San Diego in 1990, and the condition got worse. At one point I actually fell down in the middle of a department store from a back spasm when I dared to try to stand up for more than 5 minutes, and I had to crawl out of the store, aided by the local police to get to a doctor. One doctor was considering a diagnosis of MS since I had an abnormally high antigen level associated with MS. In 1991 I took a chance at acupuncture from Dr. Tong, and I borrowed all the money I could for a string of treatments from Dr. Tong.

When I first drove to Dr. Tong’s office from San Diego I had to stop the car every 10 minutes to rest my back. The trip took 5 hours, and Dr. Tong’s acupuncture treatments hurt so much that I was sweating profusely just lying on the table. I cannot represent that it was fun and games; but I kept coming since it was in my opinion, my last chance at a possibility of a normal life. I also declined to make any statements about progress because my investigative and legal training in and out of the military made me suspicious ad cautious about conclusions; particularly medical ones.

By about the fifth treatment I noticed a small change: my back now took 15 minutes to spasm in the car instead of 10 minutes. By about 10 treatments my back condition improved to the point it was at after the 1981 accident, and the same acupuncture treatments stopped hurting entirely. By early December 1991 there were no more spasms, and I was able to start a full exercise routine and my back was stronger than it was before the accident.

By mid-December 1992 I was given the best Christmas present I have ever had, and possibly will ever have in my life: I was given a clean bill of health in a U.S. Navy physical examination and cleared for active duty again. All back muscles and nerves were intact, responses were correct, and agility was back to normal.

The funny part about being healthy is that you get busy again and forget sometimes what it was like to be paralyzed and be forced to spend one entire hour just trying to go to the bathroom after you have already crawled into the room. But I will not forget that my normal life was essentially over before I started treatment with Dr. Tong; and he changed it.

I am a person who has always hated needles and still do. But the pain from treatments was and is mild compared to the pain of the years of physical and social paralysis. If anyone is concerned about possible pain, I urge you to wake up and get over it quickly, because it is not that big a deal once you have the treatment. Most people are just not as sensitive as I am about it.

I cannot describe my relief. I am enormously grateful to this good doctor, and I am sorry to have waited this long to say something about it. I will be glad to talk to anyone to verify how he has helped and how careful he is in his treatments. 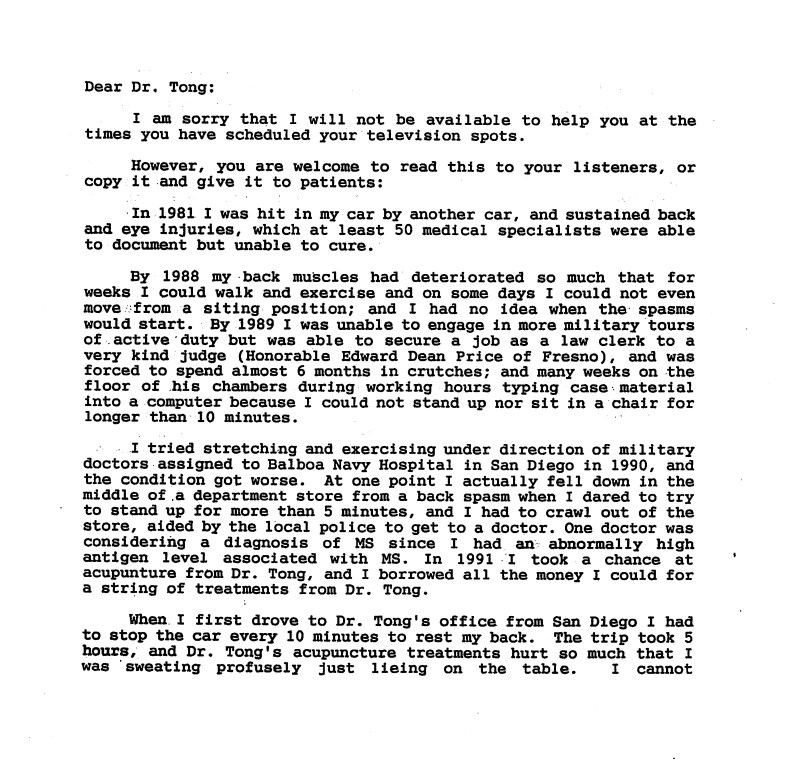 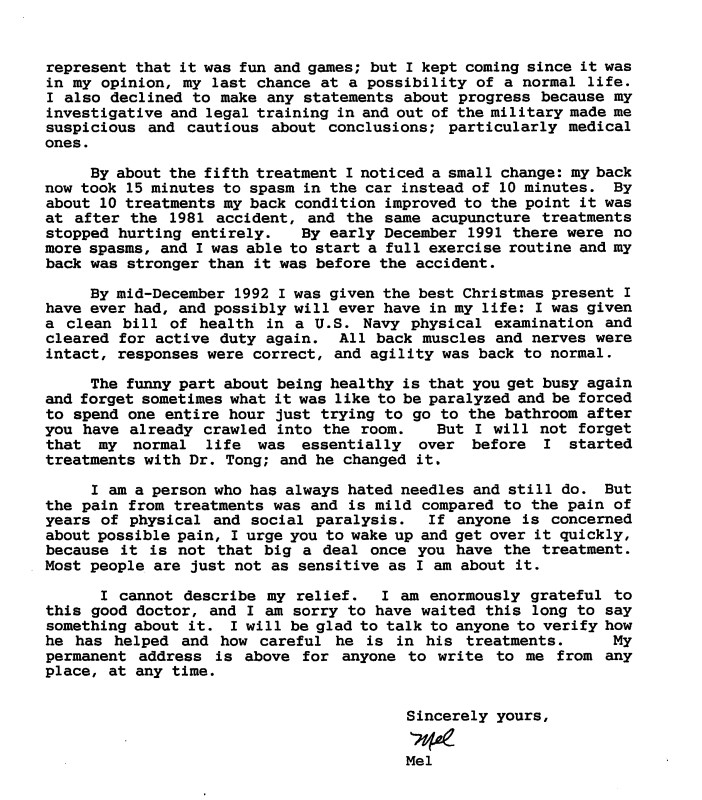