We are proud to present hundreds of success stories that have had a chance to experience relief from Dr. Tong’s treatments.

Six months ago, I ruptured and fragmented a disc in my lower back. I was told by 2 orthopedic surgeon who was very honest and who thought that I would be able to find relief with you.

I feel better and would like to take this opportunity to express my appreciation for the help you and your kind staff have given me. I am impressed with the hard work you and your staff do and the results speak for themselves. My feelings are that I would have had to endure surgery and all of its repercussions without your help. I tried everything available and your methods are without a doubt the very best.

Again, I want to thank you for the efforts you have put forth. 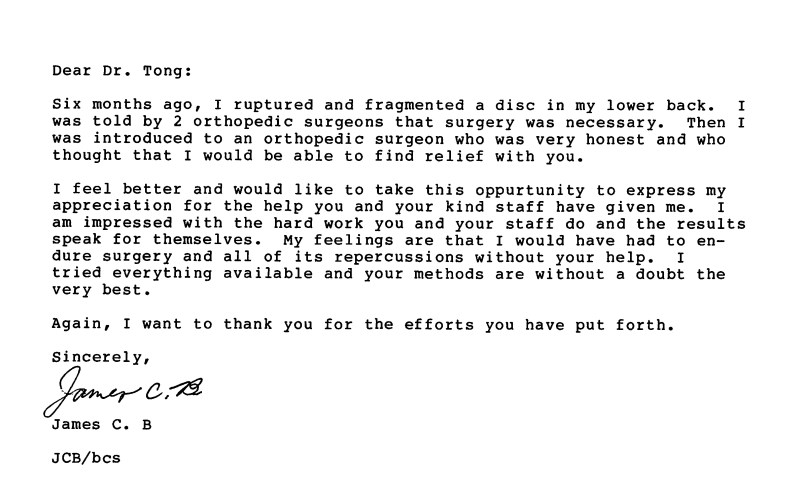 Nothing seemed to help the arthritis I have in both knees. One day I noticed Dr. Tongs picture and the testimonial of one of his patients. I went to Dr. Tong as a sort of last resort. When I got immediate relief I realized all the time I had suffered needlessly.

Dr. Tong and his staff would be the reason enough to go to him, as now I’m not just a patient and a number as is the case today with so many doctors. 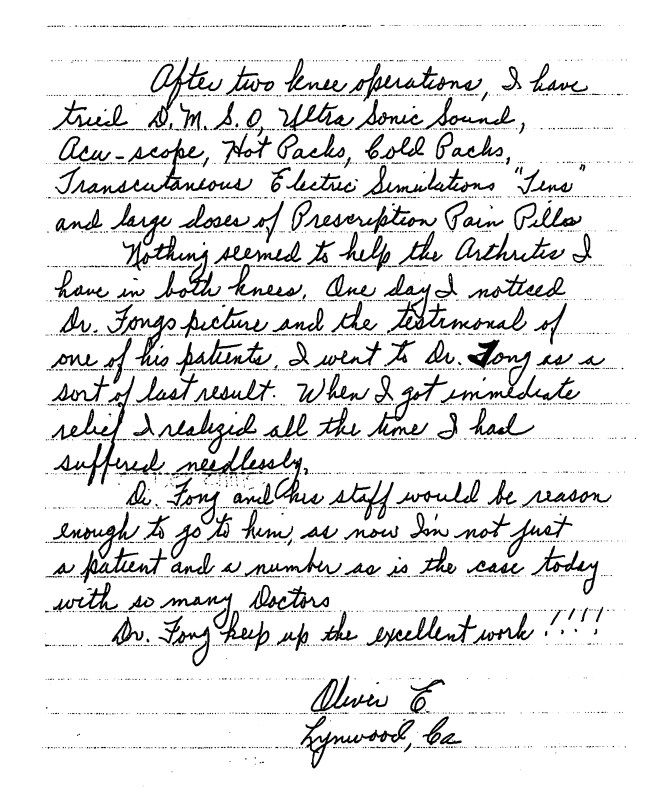 Through God, Dr. Tong and his staff saved my life. At a tender young age, I had several surgeries, plus Rheumatic Fever that kept me in bed for over two years. As we know, it damages the heart and nervous system. About 4 or 5 years ago, I had a very bad fall and that complicated matters worse and I started having back problems. I went to Centinella Hospital and stayed on the Pain Control Clinic for 3 months to no avail. Then I went to Children’s Hospital in Figueroa in Los Angeles for therapy about 2 or three months to no avail. I even went to Calexico to a couple of famous brothers and took their medicine and therapy. Yet I could not find anyone or any thing that helped me.

One day I picked up the paper and there was Dr. Tong’s advertisement. I contacted the office and made an appointment with them. After the second or third treatment, I began to feel much better. Then he put me in the hospital for that wonderful Epidural. I really felt so much improved that I stayed away for over a year to my sorrow. But now I’m again in the office taking more treatments which I know will help me and give me great comfort. Most of my ailments are Chronic, but as long as I can get to Dr. Tong (Dr. Wonderful) I know I’ll feel better as time goes by.

I highly recommend Dr. Tong for any type and kind of pain, because he through God’s mercy saved MY life. If you have pain, see Dr. Tong. 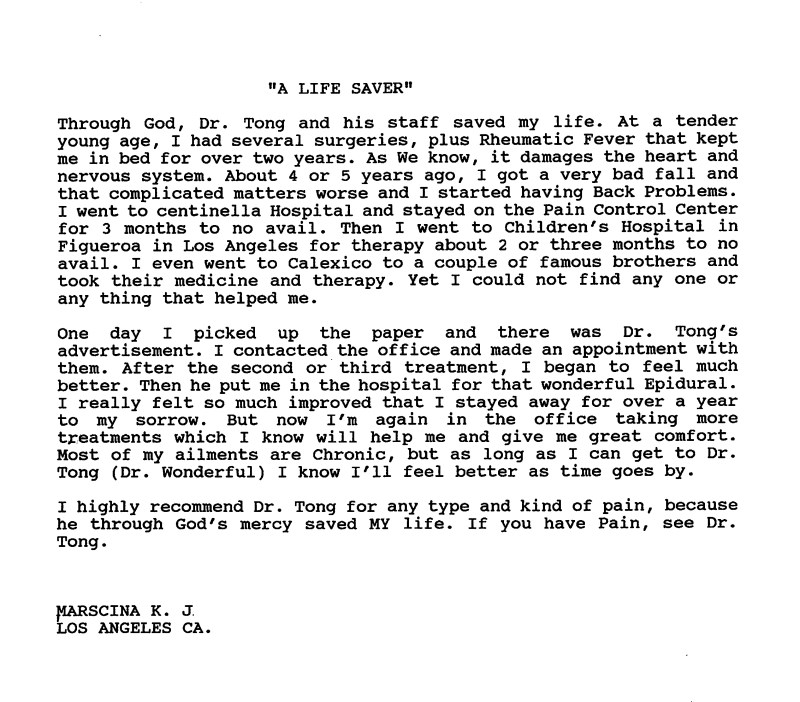 Due to a back injury in 1943, I suffered pain which got progressively worse. In 1979, I had the first of five back surgeries. These gave me temporary relief but the pain always come back. Dr. Tong was recommended by a friend who had been helped by his treatments. He has treated me or pain in my lower back, shoulders, arms, and hands, and now I am getting relief from the pain which I have suffered for so many years. I think with further treatment I will be able to throw my cane away and play golf again. Dr. Tong is now treating the tremors in both hands which are a result of the stress due to the pain I’ve suffered. He says I am a very difficult case because of the scar tissue caused by the surgeries. I feel that I would not have had all these surgeries if I had been treated by Dr. Tong. I have recommended him to friends and they have been helped by his treatments. I will enthusiastically continue to recommend him 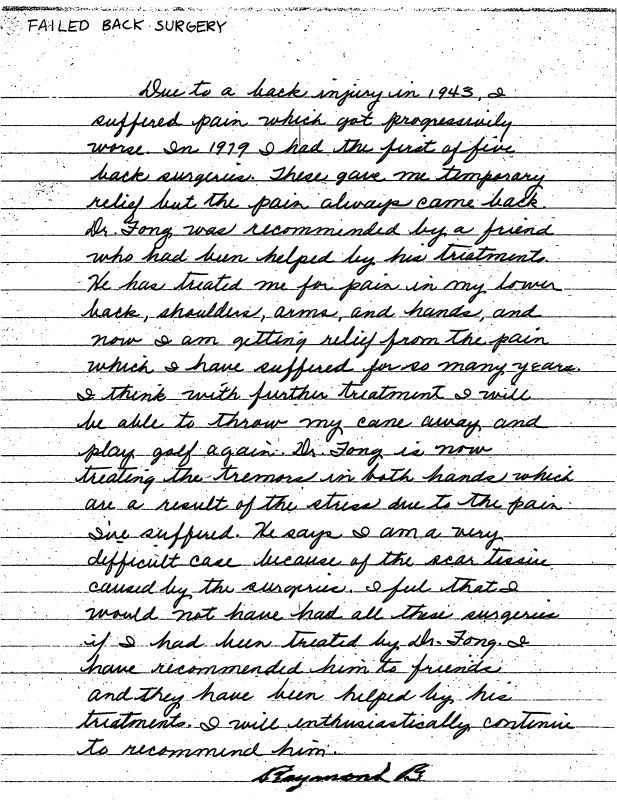 Dr. Tong has treated me now for over 3 years and the pain that I have lived with now for 30 years had been reduced 70 to 80% to an area on my upper back and my right hip with occasional sciatica involvement. I no longer think about suicide and am looking forward to a future with my grandchildren and even great-grandchildren, hopefully, free of pain.

My husband and I are originally from Indiana and all of our family now lives there. We plan on moving back there soon. When asked when, I reply, :When I’m done working with Dr. Tong.

TONG’S TREATMENT IS THAT IMPORTANT TO ME AND NECESSARY FOR MY HEALTH!

Word of this treatment has to get out! There are so many people like me whose lives would be changed to be more livable, healthy, and productive as mine is becoming.

OTHER DOCTORS NEED TO KNOW WHAT DR. TONG HAS CREATED.

YOU MAY SAVE SOMEONE’S LIFE AS HE DID MINE. 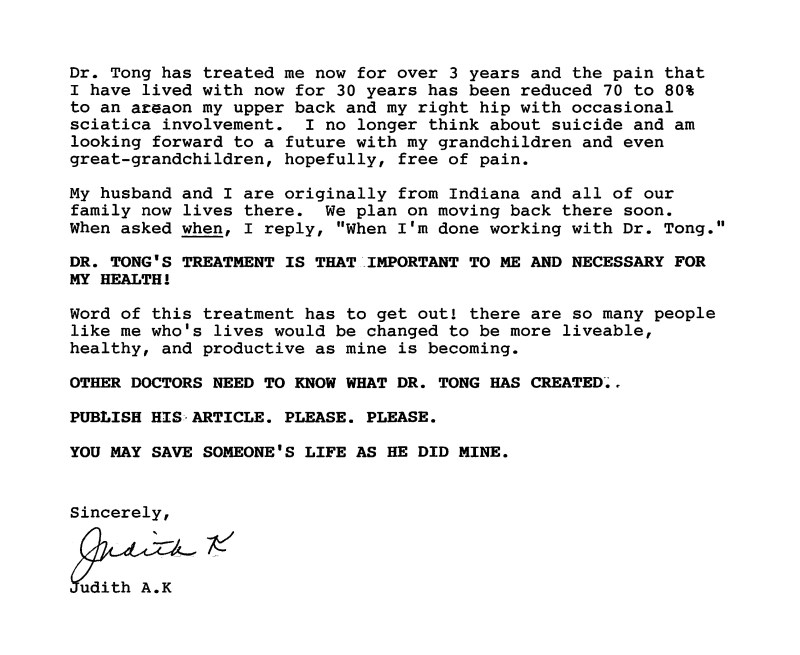 After 2 previous suicide attempts, I was seriously planning a third after another afternoon of writhing on the floor in pain, when I came upon an article regarding Dr. Tong’s treatments.

For the first time in over 26 years, I felt hope that there might be an answer to the constant nagging, exhausting, and often debilitating pain which which I was forced to live.

The pain began in August 1965 from an injury that occurred during my 4th pregnancy. It was excruciating. I worked with a respected orthopedic surgeon in our area trying physical therapy, drug therapy, traction, a shoe lit, anything we could think of to avoid surgery. But in 1970 I had a L4-5 laminectomy and fusion and spent 3 months immobilized in bed in a full body cast and then 6 months in a walking body cast. I stopped dragging my right foot after surgery. The pain did not stop.

Over the next 21 years, after my surgeon told me that he thought the pain which which I continued to have was only in my head, I didn’t quit looking for help. I sought treatment in many different ways with various doctors:

To name a few. Nothing that I tried worked in drastically reducing the pain until my first visit with Dr. Tong. I felt an immediate difference in the pain that had totally engulfed the right side of my body – head to toe – for half of my life! I left that office with my heart soaring with hope! 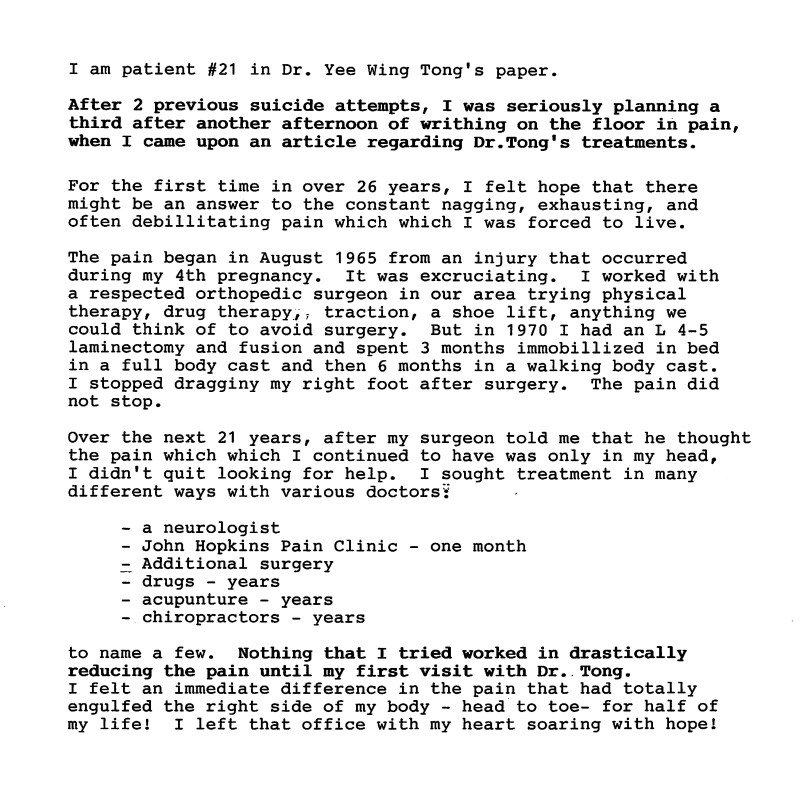 After having a laminectomy (back surgery) and being hospitalized for 5 weeks, the cure for my pain was very temporary. With constant pain again, I was advised to have 2 epidural blocks. The first one relieved me for a few weeks, and the second one was nil. The response I got from my doctor was to test me for another surgery but I definitely refused. The response from other doctors was “ learn to live with it.”

After over 2 years of pain and pills, my wife handed me an ad of Dr. Tong’s and told me “ you have nothing else to lose and he may help you”. That was my lucky day, because after 2 treatments, I lost about 70% of the pain and was truly amazed at the outcome.

I’ve had a total of 8 treatments and sincerely, if I knew then what I know now, I believe I would never have undergone surgery. 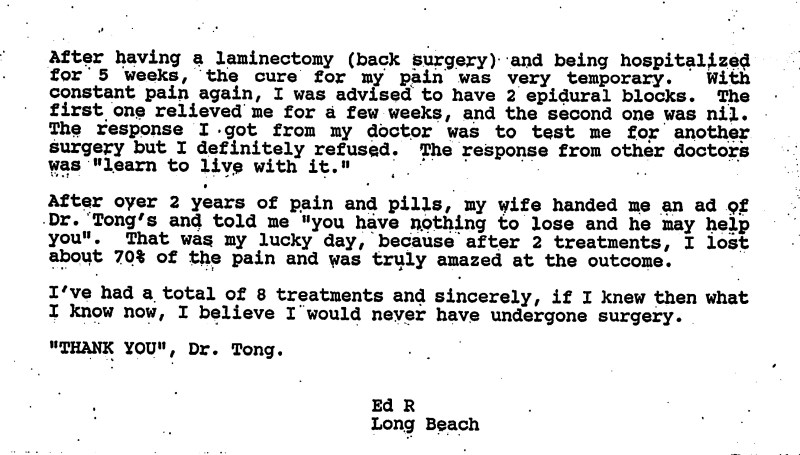 I have suffered from severe pain in my lower back, legs, and feet due to Systemic Lupus Erythematosus. The pain became excruciating following back surgery in October, 1984. I found it nearly impossible to walk or stand for any length of time.

After consulting orthopedic specialists who informed me they had no help for my condition, I returned to my internist, Dr. Dennis Clark who suggested I contact Dr. Yee Wing Tong. My first visit to Dr. Tong was October 7, 1986, since then I have had acupuncture, epidural morphine, and nerve block. My condition has greatly improved and the pain in my legs, feet, and back has nearly diminished.

I also have ulcerated colitis for many years and after being treated by acupuncture I am without pain and discomfort that is associated with it.

Needless to say I am eternally grateful to Dr. Tong and his conscientious staff. And also to Dr. Clark for his realization that the combination of Western and Eastern Medicine can achieve phenomenal results. 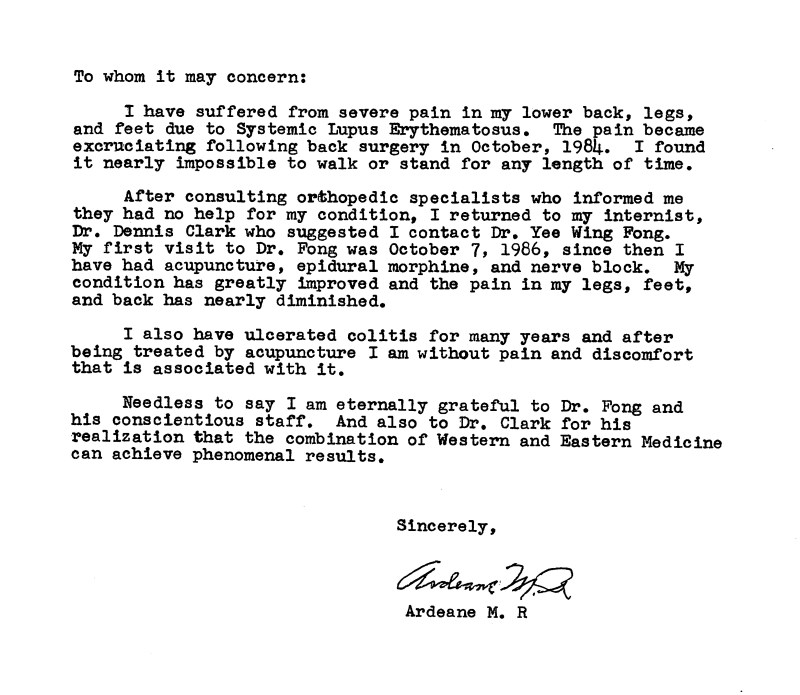 You have my permission to use this letter in your book.

After being in a severe auto accident, I was suffering from chronic pain. The most acute pain was in my back. Specifically I was having muscle spasms constantly, and was unable to sleep. I tried pain pills, muscle relaxants, and anti-inflammatory medications. Nothing worked. I started to wear a back support to help relieve the pain. I was so tender a chiropractor was unable to touch me without causing more pain and spasms.

The most remarkable relief occurred after my first treatment from Dr. Tong. The spasms stopped and have not come back. I was able to sleep. The relief from back pain was amazing.

I have no doubt that the nerve block and acupuncture treatment stopped the cycle of pain where nothing else has worked. It is my wish that others, including the medical community realize just how effective Dr. Tong’s treatment is and support his research into alternative pain relief techniques.

Do I recommend Dr. Tong’s treatment? Yes. Would I do it again? Yes, but a lot sooner. 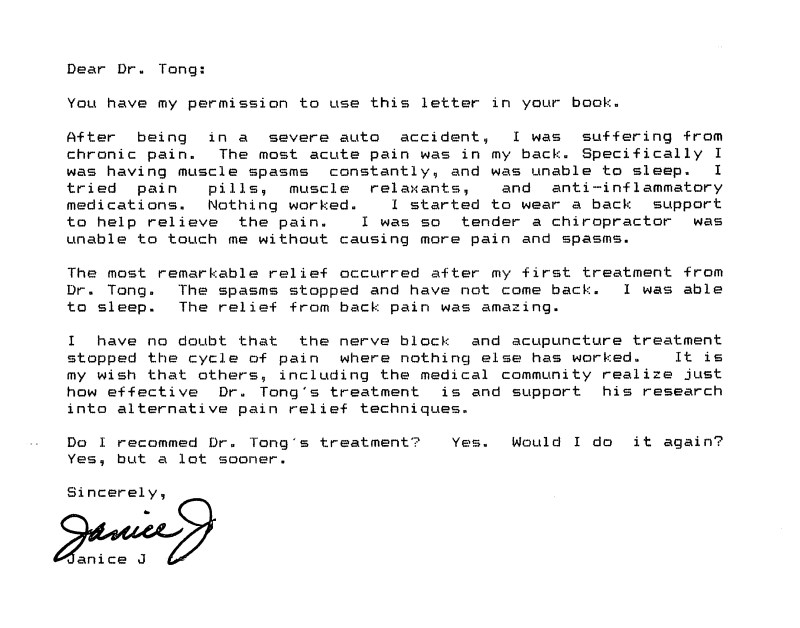 I have suffered from Fibromyalgia for over 20 years and the last 6 years, the pain has been intractable, altering my lifestyle tremendously. I could barely walk at times, and suffered intense physical pain throughout my body yet I had to work. By the time I went to Dr. Tong, I was desperate! And to my amazement, I began to improve. I moved out of state but I have periodically returned to California for further treatments. At this point I have experienced 80% reduction of pain. I feel confident that with continued treatments I will obtain complete relief. There is nothing to lose but everything to gain by making an appointment with Dr. Tong.

Disclaimer: We make no guarantees of any kind. Results may vary from person to person. Not every patient or every case can be cured, and this website is not intended to replace the direct management of an illness by a caregiver. Please consult a qualified practitioner regarding therapeutic options.

Note: Most of our patients have exhausted other therapies for years, or even decades, but were able to get dramatic relief with their very first NBE treatment!